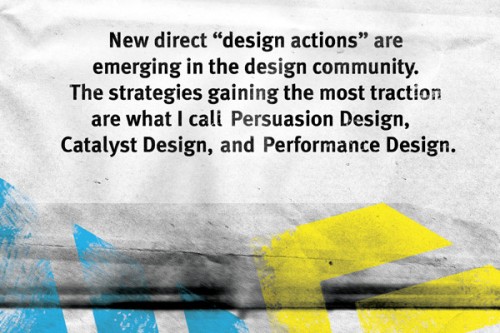 Design With Intent — How designers can influence behavior Over the past several months, I’ve been fortunate to meet and talk to a number of people — among them Jan Chipchase of Nokia, Peter Whybrow of UCLA, and Caroline Hummels of Delft University of Technology in the Netherlands — about the role of the designer in behavior change. Our conversations echoed the pent-up ambitions I’ve often heard from the young designers I teach and work with. They also reinforced my belief that we’re experiencing a sea change in the way designers engage with the world. Instead of aspiring to influence user behavior from a distance, we increasingly want the products we design to have more immediate impact through direct social engagement. Institutions that drive the global social innovation agenda, such as the Rockefeller Foundation and the Bill & Melinda Gates Foundation, have shown an interest in this new approach, but many designers hesitate to pursue it. Committing to direct behavior design would mean stepping outside the traditional frame of user-centered design (UCD), which provides the basis of most professional design today.